When does a child’s Self Esteem or Self Worth start?

It starts very early on.

By the age of 5 a child should have established their sense of self.

But a lot happen at the moment that a mother/father looks into the eyes of their new born baby.

Making eye contact with an infant makes adults’ and babies’ brainwaves ‘get in sync’ with each other – which is likely to support communication and learning – according to researchers at the University of Cambridge.

The team examined the brainwave patterns of 36 infants using electroencephalography (EEG), which measures patterns of brain electrical activity via electrodes in a skull cap worn by the participants. They compared the infants’ brain activity to that of the adult who was singing nursery rhymes to the infant. 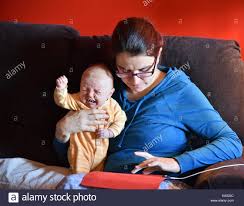 As anticipated, the researchers found that infants’ brainwaves were more synchronised to the adults’ when the adult’s gaze met the infant’s, as compared to when her gaze was averted Interestingly, the greatest synchronising effect occurred when the adults’ head was turned away, but her eyes still looked directly at the infant. The researchers say this may be because such a gaze appears highly deliberate, and so provides a stronger signal to the infant that the adult intends to communicate with her.

In the second experiment, a real adult replaced the video. She only looked either directly at the infant or averted her gaze while singing nursery rhymes. This time, however, her brainwaves could be monitored live to see whether her brainwave patterns were being influenced by the infant’s as well as the other way around.

This time, both infants and adults became more synchronised to each other’s brain activity when mutual eye contact was established. This occurred even though the adult could see the infant at all times, and infants were equally interested in looking at the adult even when she looked away. The researchers say that this shows that brainwave synchronisation isn’t just due to seeing a face or finding something interesting, but about sharing an intention to communicate. 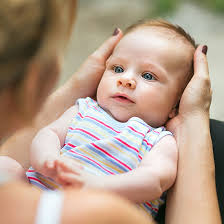 An infant learns the world from the mother’s face (or father) The mother’s eyes are a child’s refuge almost like a mirror where the child confirms their existence.

The child can draw its earliest, wordless lessons about connection care and love and eventually about being ignored.

The gaze of the carer determines how you eventually come to see yourself and your place in the world and the moral nature of people around you.

Dan Siefal a psychologist, who specialises in early parental bonding, explains that every child must have this eye contact for healthy emotional development to occur.  The mother’s gaze plays an essential role in how we develop empathy.

Deprived of this gaze can cause children to develop insecure attachments alongside losses in self-esteem and feeling of belonging.