Once again, there is outrage in the papers with a large UK store selling bikini tops for 1-2-year olds.

Back Pre-1980’s, children roamed free, without frilly bikini tops if they wished and just like the boys. Slowly we began to cover children up more and more as the world began aware that people were ‘looking at’ increasingly younger girls, even when there was nothing to hide.

Adolescence appeared to come earlier and earlier and we all started to talk about premature sexualisation of innocent girls.

Do we teach girls early to cover up or let them run wild and topless when they do not even have a bust? 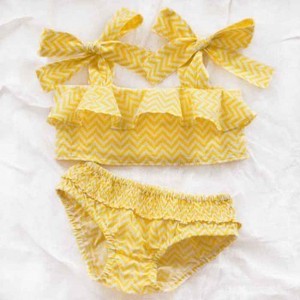 Campaigners Kidscape urge stores to ‘let our children be children’ and let children choose their bikinis when they have the need to wear them.

The world girls are growing up has changed enormously.  There are Toddler Beauty Pageants on TV, Victoria’s Secret makes underwear for tweens sporting words such as ‘sexy’ or ‘hot’ over the back side.  We see Harper Beckham wearing a trendy two piece and consequently young girls and toddlers start to copy their idols.

Girls want to emulate their mothers and peers.  Mothers want their children to fit in and are lured in by the idea of their girls being just like the celeb’s offspring.  Is it a wave of prudish behaviour enshrouding girls at a young age, teaching them that you should always cover up?

Or is it sensible?

The history of the bikini has been found as early as 5600 BC, where illustrations of women in bikini-like garments have been depicted during athletic events in the Roman era.

The first Miss World Beauty Show in 1951 had bikinis but then they were consequently banned.

Brigitte Bardot then drew attention when she wore one on the beach in 1952, in the 60’s Playboy had a bikini clad lady on its cover and by the 2000’s it became a US$811 million business.

The bikini continues to present a fine line between over sexualisation in women and the right for women to dress as they like.