Goldie Blox has teamed up with a great You-Tuber.

Goldie Blox are the team leaders in building aimed at girls the world over.

At Goldie Blox, they build, invent, and create, and they knew that in the corner of the YouTube universe there was fertile ground for growing the next generation of engineers.

They believe kids and adults alike connect with this hands-on, do-it-yourself mentality, and believe DIY videos can offer young creators approachable blueprints for their first shot at inventing. How? By hacking them together with another type of YouTube video that kids love – toy videos.

So they have teamed up with Simone Giertz, the Queen of Not-So-Good-Robots and some in house stars to create Toy Hackers. The idea is to show that anything can be used to invent something new – it’s all in the IDEA.

Simone is a born engineer and her channel shows technology alongside comedy and is happiest when inventing or creating.

Her first Robot was made when she was 8, a block of wood with sticks for arms. Now in retrospect she would have loved to have added some motors so it would have at least moved.

The two in house partners on Toy Hackers are Amie and Cindy from Goldie Blox who build in their Bloxshop. Their creations are simple but slightly crazy. Their aim is to inspire kids to tap into creativity and confidence. Learn how to make a Mailbox Alarm or a Candy Balloon Rocket.

Also featuring on the channel will be 8 year old JillianTubeHD, a mother-daughter crafting duo called MyFroggyStuff and the sweetie lovers called babyTeeth4.

“The purpose of Toy Hackers is to encourage kids to go beyond watching and empower them to start building and inventing at home,” said Beau Lewis, GoldieBlox’s co-founder,

“Any inventor or parent knows that what can be built alone with a toy is not as cool as what can be built by combining it with pom-poms, marbles, and paper-towel rolls. We want kids to see all of these materials as parts in their toolbox to inspire them to hack and create their own toys.” 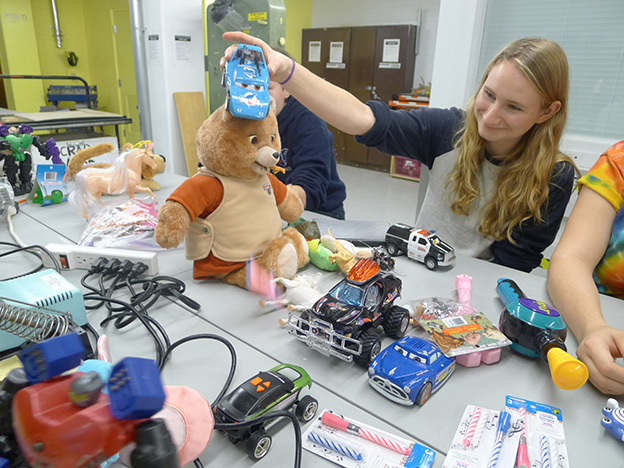